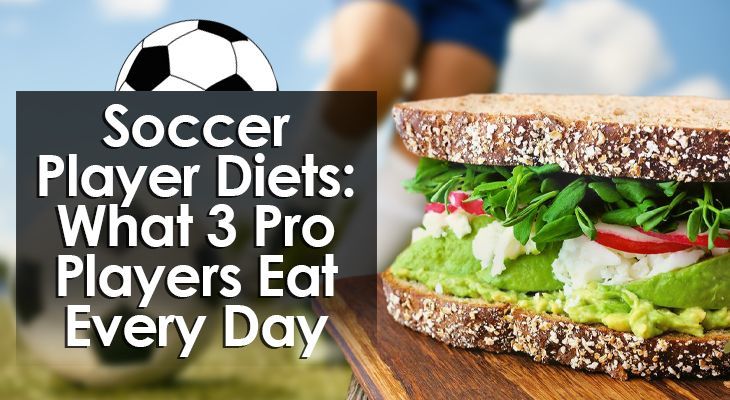 Aside from constant training, a lot of it has to do with what they eat and drink.

Gone are the days of heavy drinking and smoking in professional soccer.

These nutritionists prescribe healthy meal plans (what, when, how much), which helps keep soccer players at peak conditioning all the time.

Having private chefs and nutritionists is ideal, but it's very expensive...

Far beyond the means of your regular youth or high school soccer player.

But lucky, improving a soccer player's diet isn't that hard.

To help, in this post I'll show you what several professional soccer player diets so you can find out what the world's best eat every day.

The Importance of Nutrition

Eating and drinking habits are often overlooked by youth and amateur players.

Healthy intake of the right foods and fluids at the right time help take your game to the next level.

Not only does fuel your physical and mental performance, it also helps you recover quicker from training sessions.

While some soccer players such as Eden Hazard and Gonzalo Higuain are talented enough to have made it to the top without adhering to strict diets, most soccer players these days pay close attention to their nutrition.

This is because eating and drinking healthy:

> Increases your stamina and endurance

> Gives you greater strength and power

> Leaves you feeling energised and in a better mood

> Helps you maintain focus and concentration for longer

> Replaces liquids and nutrients used up during play

> Helps you recover quicker and reduces the risk of injury

As you can see, it's no wonder the top players and teams pay such close attention to their diets.

To give you an idea of what the best players eat and drink let's go take a look at the daily diets of Cristiano Ronaldo, Lionel Messi, and Neymar! As well as being famed for his incredible physique and fitness, Ronaldo is renowned for his thirst to be the absolute best player he can possibly be.

This involves adhering to a strict diet.

He makes it a point to only eat the healthiest of foods at the right time. This pursuit of perfection sees him eat six smaller meals each day, at regular and purposeful intervals.

This huge calorie intake helps fuel not only grueling gym sessions and high intensity workouts, but his Champions League winning performances too.

When gearing up for big games or key moments of the season, Ronaldo sticks to a strict diet and focuses on what foods he feeds his body.

During these times he will usually eat the following for breakfast:

When on more of a liberal diet, he allows himself a bit more leeway and includes:

He also enjoys having a glass of fresh vitamin-rich fruit juice -- apple, pear, and pineapple being his favourites. From time to time, he also takes coffee with his already sizeable breakfast.

Ronaldo has two smaller lunches, usually separated by a period of about two to four hours.

For his first lunch he often either has:

He then usually follows this up with a second lunch consisting of tuna, salad, eggs, and olives.

As with lunch Ronaldo also splits his dinner into two separate smaller meals.

Eating them at the right time ensures he gets enough fuel for his packed schedule of training sessions and matches.

While he particularly enjoys filets of fish (gilt-headed bream, swordfish, and sea bass being his main favourites), he also occasionally has steak.

Chicken and turkey breasts are staple dishes as well, served with rice and beans or quinoa.

Alongside these lean proteins, he has a side serving of salad.

Ronaldo's favourite food, however, is Bacalhau a Bras – a Portuguese specialty – that contains cod, potatoes, eggs, and olives

In between all these meals, Ronaldo will have a couple of snacks throughout the day.

This depends on his activity, how hungry he is, and how much fuel he needs for all those gym sessions and workouts.

Ronaldo aims for a daily intake of around 3,200 calories, keeping fat percentage as low as possible.

Ronaldo does however stress the importance of mixing things up, both in training and diet

Even for such a physically fit athlete, Ronaldo allows himself some treats such as pizza, chocolate, cak,e and wine. Messi isn't as well known for his physique as Ronaldo, but he still pays close attention to his diet.

This helps him perform at his best each time he takes to the pitch.

In general, he tries to maintain an intake of approximately 2,450 calories a day, split across six smaller meals just like Ronaldo.

While he once indulged in fast food, fizzy drinks, and pizza, the Argentine Maestro is now much more conscious about what he eats.

Since 2014 he has been working with the Italian nutritionist, Giuliano Poser, to improve his diet and help maximise his performance.

This shift to a healthier diet also meant a huge reduction in refined flours and sugar – one of the worst things for your muscles.

As Poser also recommended, he cut out most of the meat he was eating – a tough ask of South Americans – Messi is thought to drink three protein shakes a day, alongside lots of water.

Without further ado let's take a look at his daily diet and the stringent plan he follows in the build up to matches.

Building Up to a Match

Ten days before a match, Messi will cut down on carbohydrates then steadily build them up again as the match draws near.

This helps his body to maximise the amount of glucose available to him.

Five days prior to the match he'll start having vegetable soup before each meal, making sure it contains a lot of turmeric, chilli powder, coriander, and ginger.

These spices help thin the blood, thereby making it easier and quicker to oxygenate his body.

The day before the match usually sees him add fish, prawn, or chicken to his diet alongside boiled potatoes, green vegetables, and fruits.

These proteins help strengthen his muscles and repair tissues after all the training and workouts he has been doing.

On the day of the match, Messi spends a lot of time sleeping and avoids wheat-related products.

Carbohydrates now instead act to slow down the body.

If he starts on the bench, however, he is likely to have porridge or egg whites so that he gets in some proteins and carbs.

About ninety minutes before the match, Messi will eat fruit such as like a mango, apple, or banana. These have a good amount of fibre and less sugar compared to other fruits.

After a match, Barcelona's nutrition team has advised him and the other players to refuel with pasta salads or protein-rich sushi.

Now that we've seen the stringent diet plan and what it involves, let's move on to what he actually eats on a daily basis.

For breakfast, Messi will usually keep it simple and have porridge and banana with a couple of eggs on the side.

This pre-workout meal is also accompanied of course by vegetable soup and all those spices in the build up to matches.

In the evenings, Messi often tucks into salmon with rice and boiled vegetables or tuna pasta.

These with his staple vegetable soup.

As mentioned, Messi impressively drinks three protein shakes a day in between meals.

This is where he gets the bulk of his protein from.

Fresh fruit is part of his intake throughout the day, with the occasional seeds and nuts from time to time.

He also consumes a lot of Yerba Mate – a very popular kind of caffeinated herbal tea from South America.

While maintaining a strict diet, his favourite off-season meals include Argentinian barbecue, roasted chicken with root vegetables, and Milanesa – a thin fillet of shallow-fried beef in breadcrumbs. Another world class soccer player to overhaul their diet and workout regimen in recent years is PSG star Neymar.

While the fleet-footed forward once snacked on all kinds of junk food in his earlier years, he now adheres to a strict and healthy diet.

This shift in eating habits has seen him bulk up and put on much more muscle.

This transformation began when Neymar joined Barcelona from Santos FC in Brazil.

Barcelona's nutritionists started him on a strict meal plan.

This helped the skinny teenager put on muscle without sacrificing his speed, agility and athleticism.

Meal plans vary from player to player -- depending on their body type, their physical goal, and what their position requires out on the pitch.

With this, Neymar's diet and intake of calories differs from Ronaldo's and Messi's.

To start the day off on a good note, Neymar has a hearty and healthy breakfast that helps keep him fueled throughout the morning.

This often includes fried eggs and spinach with slices of lean turkey.

He may also have onion and green peppers with his eggs.

Another breakfast staple for him is oatmeal served with low fat milk and bananas.

After breakfast, Neymar always takes whey protein shakes -- both before AND after his workout.

He usually snacks on either sunflower seeds and almonds or a piece of fresh fruit.

Another popular alternative is grilled chicken breast with rice and steamed vegetables.

Later on in the day he may again have a small snack of sunflower seeds or fresh fruit depending on his workout schedule.

In the evenings Neymar usually has white fish or salmon served with boiled cabbage or vegetables, rice and beans.

He likes to follow this up with his third and final protein shake of the day.

Besides whey protein, this smoothie also includes fruit juice, carrot juice, blackberries, almonds and even half an avocado thrown in.

In total Neymar therefore has around six meals a day with half of them being made up of whey protein shakes and fruit or nuts.

Out of the 2,500 or so calories he consumes daily, only a very small percentage is fat with most of his diet consisting of protein and carbohydrates.

While he strictly follows his daily diet and training regimen, he does however allow himself a treat of pizza or French fries every now and then.

As supremely talented as they are, todays top soccer players like Ronaldo, Messi, and Neymar don't just rely on talent and effort.

They also pay close attention to their eating habits by following a healthy meal plan.

A healthy diet fuels their bodies to stay fit, avoid injuries, and be at its best every time they take to the pitch!

The same is true even for youth and amateur players alike.

They may not have access to the same resources, but making tweaks on their diets will pay huge dividends in improving their performance.

Adopting healthier eating habits is a quick and easy way to start start taking your fitness and your performance to the next level.